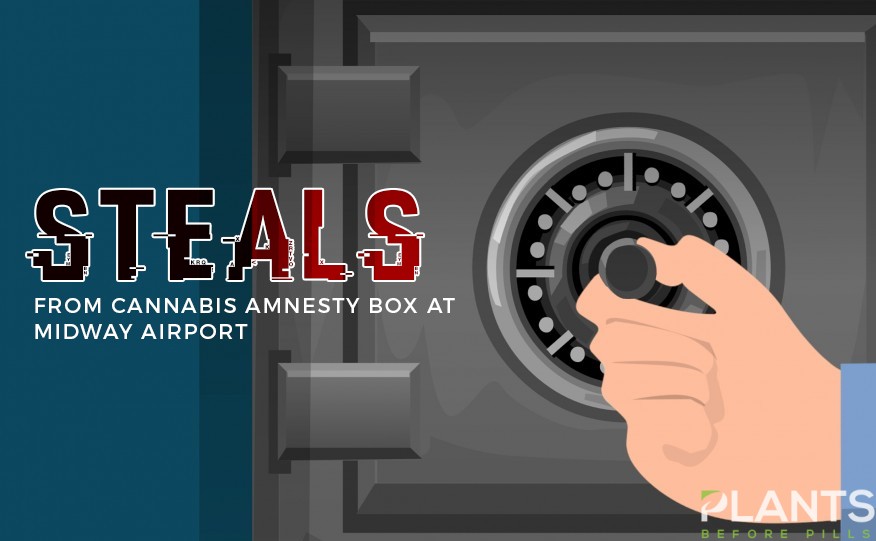 Two Chicago airports have previously installed ‘Cannabis Amnesty Boxes’ in the O’Hare and Midway locations. This allows departing passengers to leave and dispose of their recreational marijuana stash prior to going on their flights. Following the successful installation of these boxes, a man reportedly stole cannabis from one of the boxes found inside the Midway airport.

According to the New York Post, authorities only found out about the incident upon checking the box approximately at 8 in the evening last Wednesday, January 22, 2020.

Surveillance footage reviewed by the police revealed a traveler passing by Midway Airport reached out inside the Cannabis Amnesty Box and emerged with the stolen goods. Upon retrieving the goods, the man quickly moved and made his way at around 6 in the evening, notes NBC Chicago.

NBC Chicago states that marijuana has been left by a passenger whose goods were discovered upon screening.

Authorities and investigators believed the man in question just arrived inside the airport following a flight. The box was supposedly left locked at all times.

In a statement, the chief communications officer of the Chicago Police, Anthony Guglielmi said, “Cannabis Amnesty Boxes have been placed at Chicago’s airports so travelers have the opportunity to ensure compliance with federal law, as well as the local laws at their destination. Tampering with them, or attempting to remove anything placed inside, is a crime, and detectives are investigating this matter.”

In response to the thieving incident and the security of the cannabis boxes, the respective authorities will be proving upgraded versions in the near future. Guglielmi also said, “In the meantime, new, permanent theft prevention boxes are expected to replace the temporary ones in the coming weeks, making them more secure and preventing anyone from further accessing materials dropped inside.”

In the same way, the Chicago Tribune reports that the Transportation and Security Administration (TSA) spokesperson Sari Koshetz clarified that TSA agents do not necessarily search for cannabis at their checkpoints. Instead, “[in] the event a substance that appears illegal is discovered during security screening, our officers will refer the matter to a law enforcement officer, who then follow their own procedures,” said Koshetz.

Despite waves of legalization in the United States, aviation laws and airspaces are still under federal law. This means that flying or bringing drugs, such as recreational marijuana on board, is a federal offense. Last year, TSA has exempted the epilepsy drugs with cannabis on flights.

As of Friday, January 24, 2020, authorities have yet to determine the identity of the thief who stole cannabis goods from the amnesty box at Midway airport.